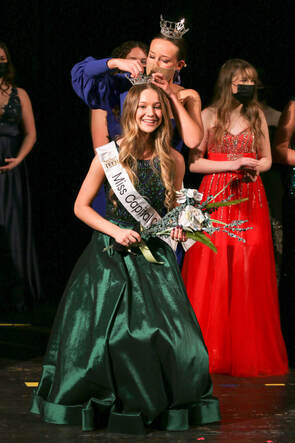 Miss Capital City's Outstanding Teen Brynn Olson promotes kindness through her social impact initiative: Be the "I" in Kind. When she goes to classrooms, she reads a book about how to be kind and inclusive. She then engages the students in discussion that helps them learn their accountability in being instinctively kind. She encourages them to share their stories and has a poster for them to take a photo of themselves to confirm their commitment to make kindness an everyday activity. Her plan is to develop their inputs into a book that she can continue to share in future appearances.
When Brynn took a unified physical education course in high school, she realized that kindness isn't as simple as just doing things for others. She learned that people with disabilities want to be treated as capable. In these cases, kindness is demonstrated by not doing something for them that they can do for themselves. Being understanding of someone's desire to show and grow their own capabilities means waiting for them to do something rather than rushing in to do it for them. Brynn loved the class so much that she wanted to take it again. As a BIOgirls junior mentor, Brynn helps younger girls develop self esteem. She works with girls in grades 2 through 6 every week. As a positive role model, her job is to help girls make achievements by encouraging them, with more focus on persistent progress towards a goal than comparing with how other people are doing. She spreads kindness by giving the girls a sense of accomplishment and confidence.
Brynn dreams of a career in film production. She has a great start toward that goal, having already performed in two documentary films. Both of the films were Emmy nominated. One Last Dance for Dad won an Emmy. In both productions, she was able to observe and learn about the process of making a documentary. She was chosen to sing a vocal solo in one of the films. Performing is important to her, she sings and plays ukulele at nursing homes, church and even in Central Park, New York City. She advanced to finals singing at the Minnesota State Fair talent competition. She has acted in four community theater plays, which included a lead role in the musical, Anything Goes.  She competes across the state with her dance team, doing group as well as solo dances in jazz and lyrical categories. Brynn knows how to create engaging content, she built up over 116,000 followers on TikTok with a video series she created during the pandemic that showed how she renovated an old playhouse in their yard. She converted it into a cool hangout for her and her friends.
At school, she is Student Council President and an honors student. She won awards for her science project, both at her local and regional competitions. Although she doesn't have a lot of spare time, Brynn loves to shop at thrift stores. She has found bargains on most of her competition wardrobe.